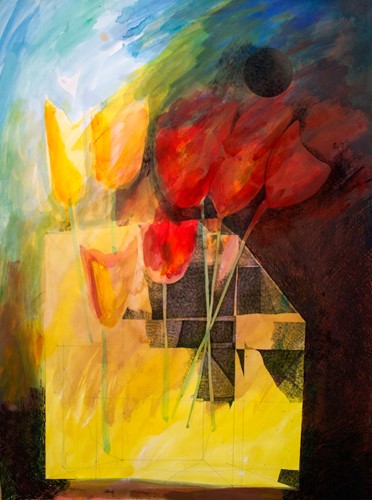 TO VIEW MORE OF THE TALENT OF DAVID GREEN PLEASE GO TO www.reasonsuspended.wordpress.com

David Green was born in Kent England in 1940. After graduating from the Royal College of Art, London, in 1964, Green taught at Croydon College of Art, Goldsmiths’ College of Art and guest lectured and conducted workshops and seminars in the southern counties whilst maintaining a freelance design and arts practice profile. He undertook a three-month lecture tour and workshop programme throughout Australia and New Zealand sponsored by the Australia Council in 1976 and emigrated to Australia in 1978 having accepted an academic position as a senior lecturer at RMIT, Melbourne. Leaving RMIT in 1985 to take up the position of Head of the School of Visual and Performing Arts at the now Charles Sturt University he was appointed the inaugural professor of visual arts in 1989 and in 2001 was appointed Head of the Wagga Wagga Campus. During this latter time he continued to supervise a number of masters and doctoral candidates and has successfully juggled an academic and artistic career for 50 years. During this time he had a number of solo exhibitions and participated in excess of fifty group shows. Green is represented in a number of public collections including the Power House Museum, Queen Victoria Museum and Art Gallery, Tasmania, State Craft Collection of Victoria, Ararat City Art Gallery, Albury City Art Gallery, Wagga City Art Gallery Warnambool City Art Gallery, Tamworth Fibre Collection. Author of four books and a former Chair of the Crafts Board of the Australia Council, he retired from the University mid 2009 and moved to the Sunshine Coast of Queensland where he is actively re-establishing his practice as an exhibiting artist through national competitions, solo exhibitions and group shows.

2003 Because I Can, Charles Sturt University, HR Gallop Gallery, NSW